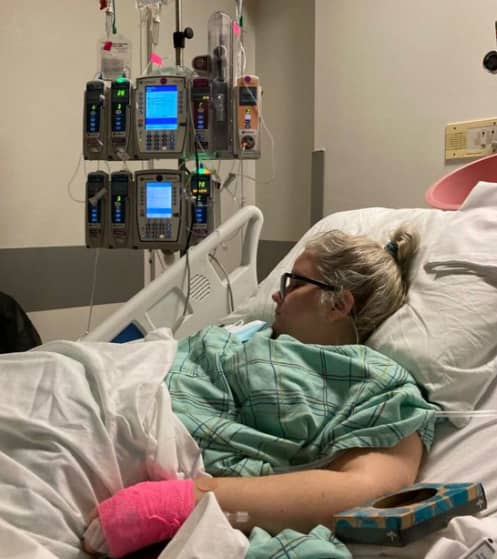 A twitter user @JA_Davids took to twitter to talk about how a medical error left her with a severe spine infection, and even after informing the clinic that she feels weird, her feelings was dismissed. Her thread gathered lots of people who also shared their experiences about medical error.

Here is her narration about the medical error;

"A year ago, a doctor injured me irreparably. It changed my life and I have been in consistent pain ever since. It's uncomfortable, but I think it's important we talk about medical error because it's incredibly difficult to engage with a system that hurt and continues to hurt you.

Last year, during a rotine egg retrieval, the doctor stuck the needle into my spine instead of my ovary. My chart says "abdominal retrieval" because of how my ovaries sit. Either she didn't read it or ignored it, because I got zero eggs and a spine infection.

After the retrieval I woke up in agony. I thought I fell or they dropped me from the table. They gave me fentanyl but that wore off on the way home. It wasn't until that evening that I realized how much pain I was in. The clinic laughed at me and told me it was probably a UTI (urinary tract infection).

The back pain kept getting worse. I went to four different doctors who said I must have pulled a muscle and dimissed my suggestion thst it might have been the egg retrieval outright. I even went to the ER who sent me home despite signs of infection.

Four months later, I woke up and couldn't walk any more. I had the fortune of finding a doctor who believe me and ordered an MRI. He called me and said you need to go to the hospital right now. I had a spine infection in my vetebrae and disc. it looked like "moths ate my bones".

The hospital did a spine biopsy and found the bacteria growimg in my spine was Strep B, which can appear in the reproductive tract, confirming I had been injured during the egg retrieval. The doctor introduced bacteria from my body into my spine.

I spent 10 days in the hopsital during the December wave of COVID-19 in NYC. I was left without pain medication frequently and unable to move. My spine would spasm for hours. Fentanyl ans dilaudid did nothing for the pain. I remeber begging for them to sedate me or kill me.

This past year has been grueling, I had a PICC line to be treated with constant antibiotics for 9 weeks. I had to relearn how to walk. I got a stomach ulcer from the pain meds. I lost a pregnancy. I had to pass on projects and jobs and lost work while in the hospital".

she further stated that she was thankful that the bills were in few thousands not tens of thousands, and sueing the clinic is not looking productive because the lawyers she contacted felt they won't be making much from the case due to economic reasons.

she also said that she went to ER a few days ago, almost a year later, with nearly identical pain and showing them her MRI with the damaged bones on a disc only to be accused of saying things a "drug-seeking person" would say, even when she didn't ask for pain meds.

" So here I am, a year later, back at what feels like square one with doctors afraid to touch me who tell me it doesn't make sense to do major spine surgery on someone so young and then send me to pain management doctors who suggest I try medication for my moth-eaten bones.

Egg retreival is a minimally invasive surgical procedure carried out to remove the eggs(s) from a woman's ovaries undergoing egg freezing or In vitro fertilization. the procedure usually as no scars, stitches, and a short recovery time.

What's your experience with a medical error?