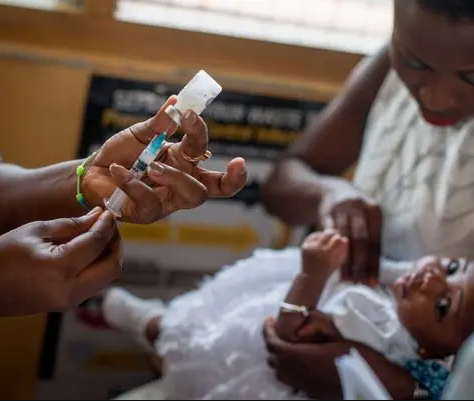 WHO Approves the Use of First Ever Malaria Vaccine in Africa

The World Health Organization has recommended the widespread rollout of the first-ever malaria vaccine, in a move experts hope could save tens of thousands of children’s lives each year across Africa.

Tedros Ghebreyesus, director-general of the WHO, announced the development at a media briefing on Wednesday, October 6.

The recommendation followed a two-year vaccine programme which involved children in Ghana, Kenya and Malawi.

"I started my career as a malaria researcher, and I longed for the day that we would have an effective vaccine against this ancient and terrible disease. And today is that day, a historic day. Today the WHO is recommending the broad use of the world’s first malaria vaccine," said Dr Tedros at a press conference in Geneva.

Speaking on the recommendation, Ghebreyesus expressed optimism that the vaccine will improve efforts on malaria prevention in Africa.

He continued: "This is a historic moment. The long-awaited malaria vaccine for children is a breakthrough for science, child health and malaria control.

"Using this vaccine on top of existing tools to prevent malaria could save tens of thousands of young lives each year.

"It is safe. It significantly reduces life-threatening, severe malaria, and we estimate it to be highly cost effective."

He added: "Malaria has been with us for millennia, and the dream of a malaria vaccine has been a long held, but unattainable dream. Today, the RTS,S malaria vaccine, more than 30 years in the making, changes the course of public health history. We still have a very long road to travel. But this is a long stride down that road."

The RTS,S vaccine, also known as Mosquirix, was developed by the British pharmaceutical giant GlaxoSmithKline (GSK), and has been administered to more than 800,000 children in Ghana, Kenya and Malawi since the pilot programme began in 2019.

The vaccine, which went through lengthy clinical trials, has limited efficacy, preventing 39% of malaria cases and 29% of severe malaria cases among small children in Africa over four years of trials.

However, in August a study led by the London School of Hygiene & Tropical Medicine (LSHTM) found that when young children were given both the RTS,S and antimalarial drugs there was a 70% reduction in hospitalisation or death.

Malaria Vaccine Africa WHO Plasmodiummalariae Breakthrough
If You want to add Image for your answer
Anonymous?