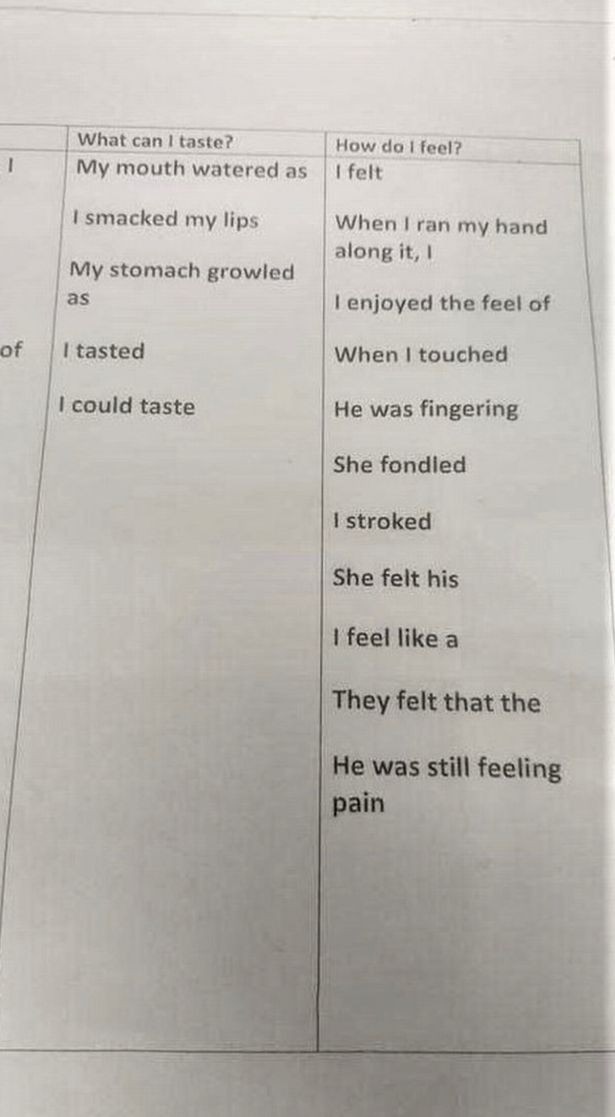 While we are clamouring proper sex education in schools to enlighten the younger generation about pedophile, abusive partner, sex orientation, contraceptives etc. However, sex education doesn't mean teaching kids most especially the rudiments or parts of sexual activity.

Annette Farrington, 27, slammed the teacher who sent out the "inappropriately sexual" creative writing prompts in a worksheet.

She said the homework had been sent out to her daughter at Our Lady and St Philomena's Catholic Primary in Fazakerley, Liverpool just before half term.
Annette told the Liverpool Echo: "She got the homework just before half term but because there was so much we had some left over so we were doing it yesterday.
"She was doing work on the Holocaust, and I think it had got mixed up with that.
"When I was looking at it I thought that doesn't even make sense, why it would be there? But after speaking to the school they said it was part of an English lesson giving examples to help kids make their own story."

"It took me about half an hour as I was in two minds thinking had I been reading into it too much but when I rang the school they said no you're definitely not.
"The deputy head rang me back himself because he was mortified with it.
"He couldn't apologise enough and said they'd been using a service that provides work for home schooling and he was sorry that it had not been noticed before it was sent out to kids.

"I was mortified because at first I thought am I looking at wrong, but I asked a few other people's opinions and I was stunned by it.
"It made me feel a bit disgusted to be honest, because whoever actually provided that work they must have known what they were doing."

It's strange, surely no one can overlook that. No one could see what's written on that paper and think that's fine."

A Liverpool City Council statement said: "This resource was included in a paper pack for offline home learning that was sent to a very small number of families in January.
"It had been sourced online by the teacher as part of a set of creative writing prompts and was used to supplement the other work provided.

"The material had not been recommended or provided by the council or School Improvement Liverpool.
"All other families who received this pack have been contacted by the school and asked to remove the worksheet.
"All schools in the city have also been advised to double check any third-party resources and we have alerted the online provider to the issue."

What do you think?

#parenting #children #sexeducation #
If You want to add Image for your answer
Anonymous?